Check out GYPSY SKIES to book your helicopter tour

I'm a flying, traveling, hunting, team roping addict; living for the moment. Follow my blog while I share my stories, knowledge and experiences along my journey.

A life fit for a gypsy
-meghan simpson

Diamond in the Rough

Diamond in the Rough is about the Simpson family of men. They have had grizzly encounters, and guided hunters to record book rams. They have seen many things that most people would only dream about. This book gives a glimpse of what it is like to see the changes from when outfitting was first taking shape.

2017 is here and I cannot be more excited to start a new chapter in my life. As most people in the hunting industry know, our family has decided to sell our hunting area in the North West Territories (Ram Head Outfitters). This was a huge family decision that involved a lot of discussions around the dinner table, but it was also one that was geared toward new adventures. Growing up in the Mackenzie Mountains with my family was a life that many people cannot even fathom. There 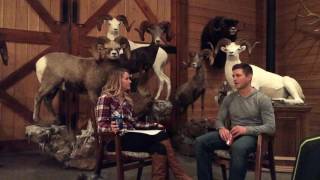 Interview with an addict - Cam Foss

Cam Foss grew up around Cochrane Alberta hunting and learning the outdoors with brother Adam and his dad Tom Foss. He has been addicted to hunting since a young age and isn’t giving it up anytime soon! Cam has hunted all over North America and recently started traveling over sea’s to hunt Ibex. A strict bow hunter is what makes this guy so unique, because he actually knows how to use it. Cam has taken over 50 animals with his Hoyt bow and been on more than 30 archery sheep ki

Since I was in diapers I have been spending my summers in a camp called Godlin Lakes, which is in the North West Territories. I would spend 3 months in the wilderness acting like a bush monkey, then come back to civilization in Alberta and try to act somewhat reserved. This is actually a tough transition since all summer I don’t even have running toilets. Starting out in 5th Grade I began spending 5 months in Arizona with my parents, roping and soaking up that southern sunshi

Staying clear of bad weather to continue flying with visual clarity rather than instrument navigation.